The inflammatory bowel diseases (IBD) are defined as a group of heterogeneous disorders with multifactorial etiology, in which a chronic inflammation of the digestive tract is caused by disturbances in the immune response to the pathogenic low-diversity gut microbiota [1]. IBD includes two major entities: Crohn’s disease (CD) and Ulcerative Colitis (UC). Current data estimates an impressive prevalence of over 0.3% globally [2]. CD is defined as transmural inflammation of any part of the gastrointestinal tract (GTI), from mouth to the perianal area, with a mainly ileal localization, while UC is an autolimited disease, of localization and histology, affecting only the colorectal mucosa. The clinical presentation of CD typically includes non-specific symptoms as abdominal pain, diarrhea, low-grade fever and weightloss, and with a low prevalence, extraintestinal manifestations. Complications of the disease include stricturing with secondary bowel obstruction, penetrating fistulas or abcesses.

Ankylosing spondylitis (AS) is a disease of spondyloarthropathies’ (SpA) class, which includes arthritis of different etiology. AS is a chronic inflammatory rheumatic disease involving primarily the axial skeleton, clinically expressed by back pain. It’s progressive character leads to continuosly increasing stiffnes of the spine, leading to spine fusion in late stages. In the light of epidemiologic studies of SpA associated with IBD, it was found an association of these pathologies in a third of the patients [3,4]. The overexpression and the complex immunoregulation of IL-17/IL-23 axis is of main importance in the interconnection of these entities [5]. Secukinumab is a human monoclonal antibody, a IL-17A inhibitor that was approved on the market in 2015, 20 years after Th-17, and consequently IL-17, was discovered. The novelty of the current case report is the long-term follow-up of a patient with new-onset of CD during treatment with Secukinumab, describing the resolution of the newly-emerged disease.

We present the case of a 40 years old male, smoker, diagnosed with AS in 2006, for which he was treated with sulphasalazine for 4 years, etoricoxib for the next 2 years and etanercept (a TNFα inhibitor) for 7 years, until 2019, when the treatment with Secukinumab started. In 2016, he started having brief episodes of mesogastric abdominal pain, nausea, diarheea, episodes that didn’t remit with any medication, but did spontaneuosly after aproximately 24 hours. Because of the short duration and the low frequency, one episode every 6 months, the patient was not referred. After only 2 weeks of treatment with Secukinumab, in February 2019, these episodes worsened and became more frequent, almost weekly at the moment of the first gastrointestinal assessment in April. The abdominal ultrasound and the colonoscopy didn’t reveal any pathologic modifications. The symptoms were to be controlled by diet. In November, the patient was admitted again as the symptomatology worsened. Physical evaluation revealed pain at the abdomnial palpation in the right flank. Paraclinical examination show only an elevated C-reactive Protein of 2.88 mg/dl. Stool examination excluded any gastrointestinal infection. Abdominal ultrasound was nomal. A colonoscopy was performed and revealed cecal pseudopolyps, but the terminal ileon could not be inspected. The MRI Enterography revealed an ileal inflammatory stenosis, right next to the ileocecal valve, explaining the impossibility of ileocecal valve intubation (Figures 1&2). 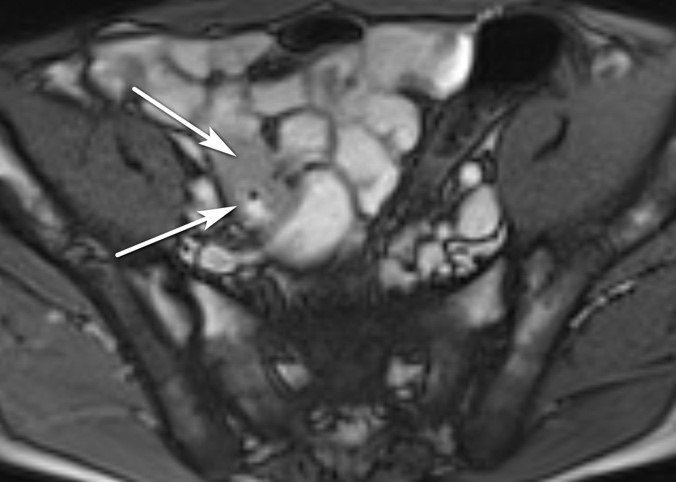 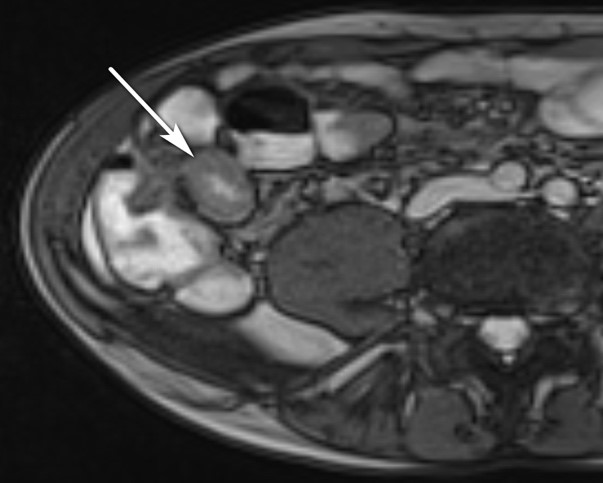 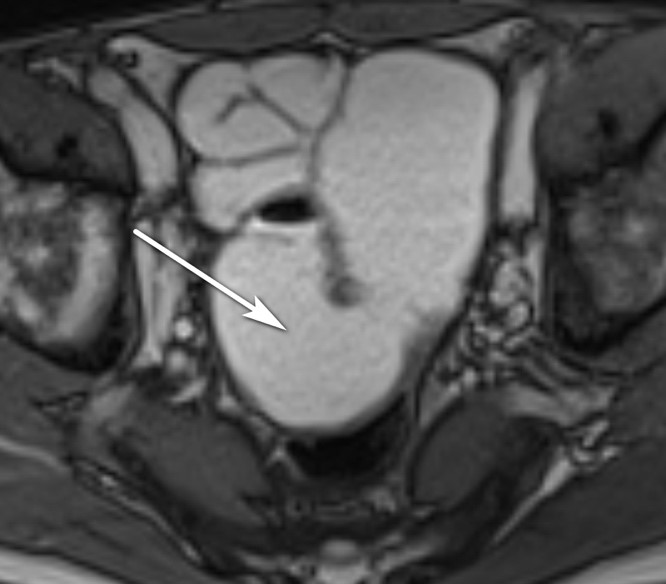 Figure 3: Upstream dilatation of the bowel.

The diagnosis was of ileocecal CD due to the inflammatory stenosis with subsequent upstream bowel dilatation (Figure 3). Secukinumab administration was discontinued and treatment with Adalimumab was indicated. At 3-months follow-up, the patient’s gastrointestinal symptomatology completely remmited, the remission being controlled by maintaining the treatment with Adalimumab, daily administration of inulin and simeticone and diet.

It is widely known that there is a close association between IBD and SpA in terms of genetics, microbiota and immunology discorders [3,4]. In the etiopatogenesis of IBD, CD4 Th cells play a major role by starting and maintaining the autoimmune inflammation of the gastrointestinal tract, by producing pro-inflammatory cytokines. Beside CD4 Th cells, another subset of Th cells, Th17 cells, are overexpressed at this level and are positively regulated by IL-23, another proinflammatory cytokine produced by antigen-presenting cells, after the contact with the compounds of the pathological microbiota [6]. The activation of IL-17/IL-23 axis is fundamentally connected to the etiology of both CD and AS, IL-17 being found extensively in the blood, the synovial fluid in AS and in the intestinal lamina propria of CD patients [7,8].

Human interleukin IL-17 was found to be involved in different autoimmune diseases, such as systemic sclerosis, multiple sclerosis, systemic lupus erythematosus, psoriasis, asthma, SpAs and IBD [9-14]. While IL-17 is a pro-inflammatory cytokine, current data suggests a protective role on the gastrointestinal tract in IBD patients [15]. The importance of this paradox is to be seen in patients that benefit of biological treatment with IL-17 inhibitors and might associate a latent IBD.

Studies conducted with the objective of administering Secukinumab on CD animal models studies (2 ref trial) and on one human trial, which had to be completed prematurely because of the diseases’ unfavorable evolution compared to placebo, enforcing so the theory of IL-17 as being, in an unknown manner, a protective factor in the natural inflammatory evolution of CD. It is suggested that this difference may be due to the pathological microbiota found in IBD [16-18]. Using the data of these trials and knowing the statistical association between CD and SpA, the IL-17 molecule being overexpressed and playing different roles in both diseases, it might come handy that by inhibiting the IL-17/IL-23 path in SpA, the inflammation of the gut might worsen.

In Secukinumab’s summary of product characteristics, IBDs are mentioned in the section of special warnings and precautions for use, warning that the patients should be closely monitored. The latest retrospective analysis of pooled data from 21 clinical trials, containing 7355 patients, concluded that the cases of IBD during treatment with Secukinumab were uncommon [19]. The reported incidence of CD among 794 patients treated for SpA was 0,1 per 100 patients/year, with 5 new onset cases of CD (0,63%) and an exacerbation found in 3 out of 5 patients with a history of CD. The question this case raised was whether our patient was having a silent CD that was activated by this treatment or he developed the disease on a normal gastrointestinal tract. Anamnestically, the patient did associate in time the onset of gastrointestinal manifestations with the use of Secukinumab.

Diarrhea is a common side effect of this treatment and the patients should be informed of the possibility of having an inactive IBD that might activate during this treatment and they should be advised to adress a specialist if the gastrointestinal symptoms persist. IL-17 positive cells are not detected in the mucosa of healthy individuals, infectious colitis or ischaemic colitis patients, but IL-17 levels are significantly elevated in active and even in inactive CD [20]. Therefore, we can’t state that a subclinical CD was not present, taking into consideration also the frequency of IBD and SpA associating. Using the patient’s history and the current data available in the literature, we strongly believe that Secukinumab was the trigger of CD in this case.

Currently there are treatment guidelines just for IBD and SpA individually, but not any for both IBD and SpA, which would be needed in the near future, as more specific biological therapies emerge, targeting different inflammatory pathways. As written in the summary of product characteristics of Secukinumab, a close follow-up for IBD patients is needed, but, even if the new onset of CD is reported to have a low incidence, a gastroenterological monitoring would be recommended even for healthy individuals, because of the reported prevalence of IBD and SpA association.

A gastroenterological consult before the initiation of the treatment would be beneficial, since SpA may precede the onset of IBD [21,22] or may associate with an underlying asymptomatic intestinal inflammation [23]. This case report is also enforcing the current data of IL-17 having a protective role in IBD, it’s path inhibition leading to exacerbation or to activation of a silent IBD. Of biological therapies, there are safer treatment schemes for a patient with AS and symptomatic or silent CD, which could include Ustekinumab, a human monoclonal antibody that is targeting the IL-12/IL-23 path, Infliximab, a chimeric monoclonal antibody that inhibits tumor necrosis factor alpha (TNFα) or Adalimumab, the first human monoclonal antibody that bind and neutralizez TNFα. The statistics and this case report are underlining the importance of a multi-disciplinary approach when prescribing biological therapy, including rheumatologists and gastroenterologists. Why the IL-17/IL-23 axis is having a „paradoxal” role on the gastrointestinal tract it still a question that’s laking an answer and represents a future research direction.

The authors are grateful to dr. Dana Alina Magdas for the careful reading of our manuscript and for the suggestions related to its improvement.